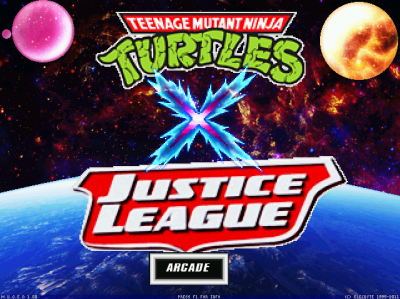 The game is finished! right here for people want to try it out!

First and foremost rather than bury the lead it is important to note that this game was built using the M.U.G.E.N. Engine. However it's designed to hide that as much as possible. This game was a culmination of ideas from several people who are heavy TMNT Tournament Fighters Players while being coded by Kamekaze/OldEra . The goal was for this to feel like a classic fighting game from the 90's but with modern day control so that the input problems of the past stay there while everything that made games like that interesting remain. It is a 6 button (LP/LK/HP/HK/SP1/SP2) fighting game that uses the remaining 2 buttons for super activation.

While these inputs can be changed at any time the default layout is as follows.

The SP1 and SP2 buttons do nothing separately and only work when both are pressed with a full bar of power. 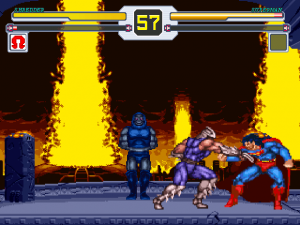 Landing the first hit of the match will grant you Omega Factor!

This game is pretty similar to TMNT Tournament Fighters but with a more modern approach to input buffers that one would find in a modern polished fighting game. That being said it pays homage to that era with:

CPS Cancels: Following a somewhat similar rule from the CPS 1 Street Fighter 2 editions, you can cancel the first 3 frames of a light attack into the heavy by inputting both light and heavy buttons. However this can only be done upon canceling a light into the same light at least once. EG. LP > LP+HP will result in the HP coming out from the second LP. Again, pretty much how SF2 works.

Super Attack: By inputting the two Special buttons with a full power bar you can unleash a powerful attack that can finish a round in style or even the odds of being on the defensive.

Juggling: Certain attacks will allow the user to follow up with other attacks and juggle the enemy. However you can only juggle for two additional hits no matter what. The only thing that will juggle non-stop are referred to as "Omega Specials". They can be used anywhere in a combo and do not count toward juggles at any point.

Omega Factor: When a character's life is flashing or they have an Ω symbol under their life they can perform what otherwise would be referred to as an EX move but unlike an EX move Omega specials still build meter for supers. They also ignore the two hit only juggle system entirely and will not contribute to it in any way. Supers also have Omega variations.

Universal Command Grab: Adding another layer of offense or potentially being an interesting layer of defense. This mechanic creates gives every character a 3f option that can turn the tide of the battle at the cost of it having a lengthy recovery. The user can start a juggle combo or create a deadly reset guaranteeing to put the opponent on the defensive.

Priority System: Much like street fighter 3, this game does have a attack priority system. However, the priority is only applied if two attacks hit each other at the exact same time. The order is as follows:
(< = will lose to the attack to the right)

This game takes place during the ending of Justice League Task Force in which a defeated Darkseid escapes to another dimension in search of the Anti-Life equation in which he would use it to dominate any and all universes. Upon learning it is in the dimension he escapes to he makes it his sole mission to find it there. However the very dimension he finds himself in is a parallel universe in which he and all others are seen as comic book characters and nothing more. Meanwhile, Despero found the opening in space time and used it to track down the Justice League for his own purposes. This very place is populated by the Teenage Mutant Ninja Turtles. In search of the equation Darkseid immediately begins reducing entire regions to ash and his very presence causes the world to change. A new power source has revealed itself due to this cosmic imbalance and every living thing is affected by it. It was later referred to as the "Omega Factor". The omega factor, also known as the omega effect began to manifest itself in all people in different ways depending on the amount of hatred in their hearts. Because of this the world began to fall into chaos over time. As Darkseid began his search for the Anti-life equation he felt a huge amount of hatred in an abandoned missile silo. There he found a very dead Shredder. He resurrected him which gave him massive amounts of power and gave Darkseid a powerful enforcer to deal with anyone who got in his way. When he read his mind he learned just who Shredder hated and permitted him to exact his revenge before joining him.

Back at the Turtle's hideout, Donatello's monitor alerted him that a huge amount of activity was detected at the very place they defeated shredder a year ago. When they arrived they found a barely coherent shredder and a dead Karai behind him. They tried to fight him but was swiftly defeated one by one. When it appeared that it was all over, a familiar face appeared to help them escape. Raphael immediately recognized him as Batman and was finally able to prove that they did meet and that he is real. Batman explained the situation to them back at their hideout and they began to search for the other Justice League members hoping they were also transported to this dimension. After a lengthy search they began dealing with the chaos the Omega Effect was bringing to most of the planet as best they could. Eventually superman noticed a huge amount of lava pluming from the pacific ocean and was able to identify that Darkseid was there. The final plan to take him out was established and they split up to initiate it.

The plan went well and it appeared Darkseid was on the ropes, but he revealed to them that he found exactly what he was looking for and tapping into that gave him even more power as he branded himself "Darkseid Omega" ruler of all existence. A combined effort by the heroes and unlikely anti-heroes were able to subdue him before he became too powerful. They then noticed the rift in space was beginning to close and they made preparations to get the Justice League and their dimensional affiliates back home. As they said their final good byes, the turtles and company couldn't help but notice a new series of planets that was a cosmic result of the entire affair setting up the events of TMNT Tournament Fighters for the Sega Genesis.

AS THIS GAME CONTINUES TO BE DEVELOPED MORE THINGS WILL BE REVEALED.

This refers to the characters that were playable as of the last alpha of the game.