Sailor Moon S is not a perfectly symmetrical game; Player 1 and Player 2 have different properties on the same move in the same situation. This is probably due to development oversight or game glitches, and sometimes referred to as “Port Advantage.” However, the game is very consistent once you understand the rules. This document explains the advantages that P1 and P2 each have. There is also a Cheat Sheet to use for quick reference. 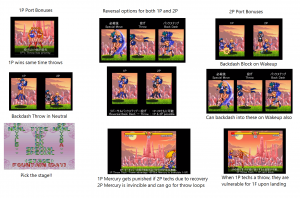 Thank you to @Koushun1022 for the source material and @LEmentalBeast for help making this document. Hit me up @STLMrK with any questions or feedback.